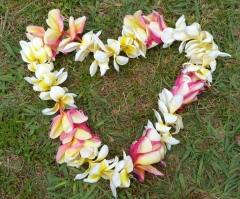 A lot of changes have been rumbling through my life lately. An inner urge was calling me to take a trip to Hawaii recently; I listened and set out to look for that “life changing thing” I was hoping to find along the way. Although that ONE thing I had hoped for did not cross my path, many other things kept happening, allowing for a smooth transformational process that I didn’t even realize happening until it was already complete. One that has brought wonderful blessings my way and still continues to do so. While traveling I received messages regarding my purpose, finally allowed myself to see and hear my own truth and to live in alignment with my values, needs and integrity for myself. Never before have I experienced so much clarity about who I really am at my core and what it is that truly matters in my life. Embracing my roots as a strong foundation for authentic self-expression.

And this is where I am now: totally FREE but puzzled by the realization that literally EVERYTHING is possible now! But what does that mean? Sure, I said this many times before – to myself, to friends, to coaching clients. But this is it: endless possibility and I am blown away. Excited, puzzled and confused. Wow, I never knew how challenging it is to really embrace the option of endless possibility without getting trapped in any sort of self-imposed limitations!

Little did I know when I set out on the quest to myself  that it would also lead me to the hardest thing I ever had to do: letting go of  love – for love – for now. I did. It hurts. A lot. Yet it was inevitable and all I can do for now is trust that this is happening for a reason. You can’t lose true love. You might not share your life any more, but that deeply rooted connection at soul level will always be there. And suddenly the concept of endless possibility entails so much more. I am always capable of love regardless of location or the physical presence of my loved one(s). My capability of love is ENDLESS. Of course it is wonderful to be with the one(s) you love. This is not possible for now but I am free to love endlessly anyway. And I do. Always. Letting go of everything to enter the VOID – the only state of mind that allows for endless possibilities to emerge so we can truly experience what “everything is possible” really means. 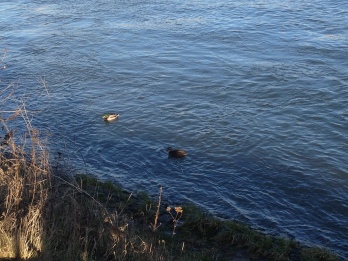 This post was inspired by the two little fellas to the left. The other day I was going for a walk along the river, which I usually do to organize my thoughts when I have a million things on my mind. While I was taking my stroll I noticed two little ducks in the water so I stopped and watched them for a bit. Although I’m not an expert on the mating habits of ducks, I am pretty sure this was the duck version of a couple – male and female. Lets call them Donald and Daisy for simplification purposes.

Daisy was swimming close to the shore pretty chill and content, whereas Donald seemed to crave the excitement. The shore wasn’t enough for him so he kept paddling into deeper waters and at times was too far away from Daisy for her to even see him. But Daisy didn’t care. She kept doing her thing and explored the shore in her own time. Turns out there was no need to worry for her because Donald kept coming back at all times. And after each return they kept swimming together for a certain distance until they parted again until reuniting…

Why is it so hard for humans to do the same in a relationship? Once we fall in love with someone we come to think that we need to be physically and mentally close to each other at all times. As soon as a distance emerges between us we start questioning the whole relationship. In situations like that life tends to send us temptations – I call them “life’s special offers” – they usually appear out of the blue and would provide an easy fix for our problem at hand. Many people love sales and special offers so they go for it. After a while they realize that there was a reason for the bargain prize: bad quality, limited durability or it breaks right away…They regret the “purchase” and want to return the “item” but usually the warranty is up so they are either stuck with the faulty item or without it because they disposed it right away. And this is when most people start regretting quick fixes and previous impulsive decisions.

I think we can learn a lot from the two little ducks: Even if one of them maneuvers the waters much quicker, it would never leave the other one for a faster piece of driftwood. They trust that the other one will catch up at some point and enjoy the times when they swim side by side. And this is what people should do as well…instead of fussing about the differences and problems there might be in a relationship, the focus should be on similarities and trust. We put so much energy into “making things right” again according to our own definition and before we know it our ego and inner control freak is turning our relationship life into a living hell. If we’d just have more trust in life and would let go of the things that are not controllable anyway, we’d be much more peaceful and could save our energy for relevant and changeable visions and missions. Just because our pace of life doesn’t always go hand in hand we can still have a good foundation to build on. And when the time is right, our pace will come together again and we can enjoy a swim together… Two people will never have the same heartbeat…they can still dance to some groovy beats!

If a man does not keep pace with his companions, perhaps it is because he hears a different drummer. Let him step to the music which he hears, however measured or far away. Henry David Thoreau